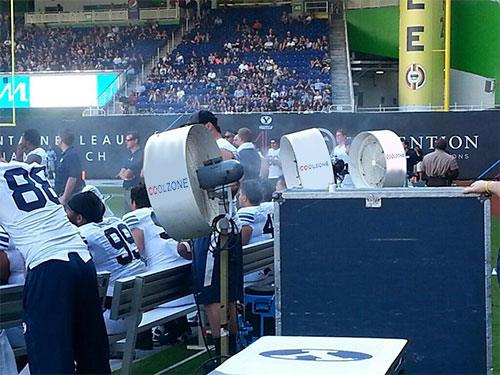 THE BREEZE MACHINE COOL ZONE IS HOT IN THE NFL

Christopher P. Miehl, who grew up just 10 miles away from Rich Stadium, is an avid Buffalo Bills fan.

But on Sunday he’ll be backing both the Bills and the Vikings in his return to his old neighborhood. In fact, Miehl supported the Patriots in last year’s Super Bowl. And in the past four seasons, he’s been behind the Colts, Lions, Chiefs, Bengals, Steelers, Chargers and other Buffalo foes, too.

That’s because Miehl, 40, is in the fan service business. He’s come back to the South Towns this weekend as executive vice president of Cool Zone, the San Diego company that creates a London fog along the sidelines of pro football on steamy days.

In fact, if you missed Cool Zone’s fans over the last few seasons, you’ll surely get a chance this year. The big, white fans are scheduled to be used at 78 pro games this season and dozens more college contests.

Sweaty athletes squatting before the fans enjoy the cooling effect of the simple technology of Cool Zone: fan-blown water produces an evaporating mist that cuts the temperature by 20 to 25 degrees.

“The Bills were the first NFL team to use our product,” said Miehl, son of Frank and Frances Miehl of Hamburg.

That was in the AFC championship game in Miami in January 1993, which the Bills won. The Bills hired Cool Zone to accompany them to Pasadena later that month for the Super Bowl contest with the Cowboys.

Since then, six Cool Zone fans have shown up behind the Buffalo bench in every road game involving a warm-climate opponent. In what is the earliest start of an NFL season, Sunday’s game is the first home contest for which the Bills hired Cool Zone, Miehl said.

“We have a hard time with guys who are big in this sport,” said Russell “Rusty” Jones, the Bills’ strength and conditioning coach. “Heat has such a devastating effect on performance.”

He said the Bills used to have a tough time keeping cool in Miami, for instance. The team tried blowing fans over ice cubes, wet towels, ice packs. “But it never worked,” Jones said.

He said he spotted Cool Zone fans in a college broadcast on television and ended up hiring the firm.

“I will tell you this: psychologically as well as physiologically, it’s a plus,” Jones said.

At home games, if the host sets up Cool Zone fans for its squad, the visitors must get them, too, according to league rules. At $2,500 per sideline, Cool Zone still barely breaks even in leasing and operating the equipment to teams, Miehl said.

But that’s fine, he said, because the games provide publicity, something the five-year-old firm needs as it attempts to exceed last year’s record of $2 million in sales.

Growth is certain, he said, because Coca-Cola has adopted the company’s systems for pavilion concession stands to cool customers. One such setup is at the Canada’s Wonderland theme park near Toronto. The pavilions were used at 17 Coke locations in Atlanta during the Olympics last summer.

“In the first year of putting these Cool Zones at 14 theme parks, Coke’s sales went up 127 percent,” said Naugorney, who attended the University at Buffalo during the 1960s. The former New York Mets and New York Islanders executive said he invested all the money he made in sports into Miehl’s company after investigating its patents.

In June, Naugorney also got some Wall Street investors to buy a $1.5 million stake in Cool Zone. He said he expects to take the company public in three years.

Miehl said the capital has been needed for the company to grow. Until last year he hadn’t drawn a salary and was charging company expenditures on his personal credit cards. “The company didn’t have credit,” he said.

The company’s products, also used in industrial settings and open-air malls, are expanding. Cool Zone intends to roll out a system to help cool firefighters next year, Miehl said.

Meanwhile, its credibility is building in sports as systems have been used at the World Cup in 1994, in major league bullpens and in college football bowl games.

“We’ll be used by the Bills six times this year,” Miehl said. “They’ve never had a real, live game in August in Buffalo. It could be hot.”