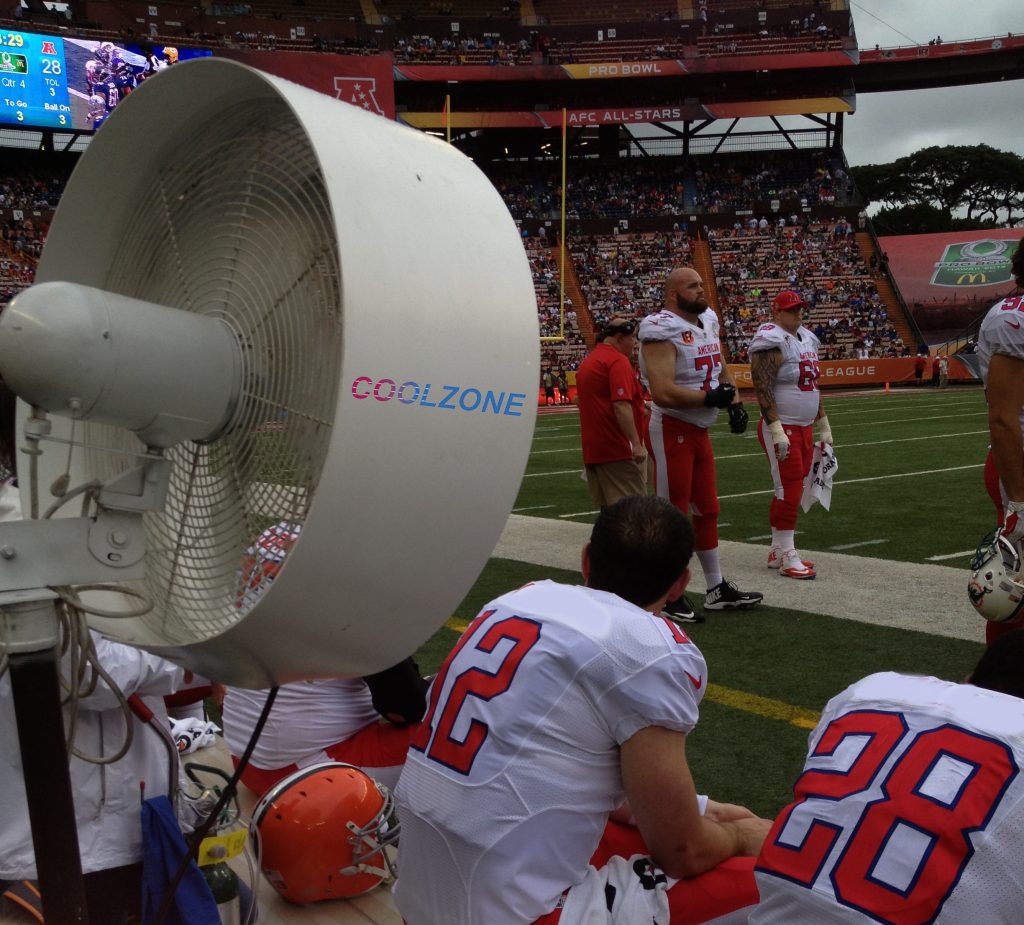 Cool Zone was the first company to put Misting Fans as a sideline cooling system for the NFL and NCAA football games. How did that come about? Where did the idea come from to put misting fans on the sideline of football games?  Was it a fluke or was it just genius?

Below is the history of how this occurred.  How Misting Fans ended up on the sideline of football games?  How did it turn from a being a novelty to absolute necessity for every NFL team and division 1 NCAA football team? Misting Fans and/or cooling systems have become a sideline fixture for almost every game in 2020 football season.

Christopher Miehl, the current President and CEO of Big Fogg, remembers how the idea originated to place Misting fans on the sideline of football games.

“I was working as a consultant, or in other words, I was between jobs looking for work.  A Headhunter connected me with a company that had a backyard misting system that was being assembling in Los Angeles.  I was helping them find another location to move the company production, since labor in LA was expensive. We were told to locate the company in an economically disadvantaged community, where we could receive tax breaks, and other government assistance.  It was suggested that we look at the City of Hemet, CA in the Inland Empire since it fit these criteria.
Another member of Cool Zone and I arranged to visit with the Chamber of Commerce in Hemet.

It was a hot sunny day in June when we drove to Hemet.  We meet with the Hemet Chamber President, and he showed us around town and to the facilities where we could receive tax breaks. These facilities did not meet our criteria.

After our meeting, during our return trip from Hemet we drove through the farm community surrounding Hemet.  It was very hot that day, and the farmers had set up large fans with water nozzles that were cooling down the cows.  We joked about how the large cows looked like professional football players cooling themselves in front of the spray from the make shift misting fan.

The idea came to us  that we could put these fans on the sideline of football game to keep the players cool.  We could put our company’s name on the shroud covering the fan as advertising for people to see our name and purchase our backyard misting system.

I thought of our idea and I contacted a friend who worked at USC, who lead me to another person and finally to the USC equipment manager, Dino Dennis.

Dino liked the idea.  Consequently, USC became the first football team to use misting fans on their sideline and did so throughout the entire season.

At the end of the college football regular season USC was contacted by the Aloha Bowl to determine where they could find their misting fans.  It was abnormally hot in Honolulu. Kansas State was playing BYU and both teams wanted misting fans for their bowl game.

The first question we asked the Aloha Bowl was “Are we going to get paid for our services”?
They offered to pay for the services so we had our first paying football gig.

Our Cool Zone made arrangements to ship twelve misting fans, enough to service both teams, to Hawaii for the Bowl game.  We sent over a crew of four enough to transport and assemble the misting fans.

The game went off without a hitch.  As I was watching the game on television, I noted that Cool Zone fans received a lot of exposure.

Rusty Jones of the Buffalo Bills saw the Misting Fans on the sideline at the Aloha Bowl.  The Bills had just beaten the Steelers to go to the AFC Championship game in Miami.  We were then commissioned by the Bills to set up misting fans on the sideline for the Bills against the Dolphins. The Bills defeated the Dolphins in AFC Championship game, and then went on to play in the Super Bowl.


The Super Bowl that year was in Los Angeles, and the Buffalo Bills were scheduled to play the Dallas Cowboys.  The NFL hired us to supply misting fans for both the Cowboys and the Bills at the Rose Bowl, where the Super Bowl was being placed.

We showed up that day in the morning of the big game with a truck load of misting fans and associated equipment.  I was on the Cowboys sideline and ex-football star OJ Simpson stood next to me right before he flipped the coin and declared “If this game is half as good as its hype it will be a great game”.
Five months later was accused of murder.

The Bills got off to a good start and were ahead 7-0.  But Cowboys came up to dominate and were up 28-10 at half time.  The half-time show was included Michael Jackson and Garth Brooks.”

So, the idea of bringing Misting Fans to the NFL & NCAA football Sidelines went from Big Fans with nozzles cooling down cows in Hemet to setting up Misting Fans on both sidelines of a Super Bowl in eight months.  Amazing!